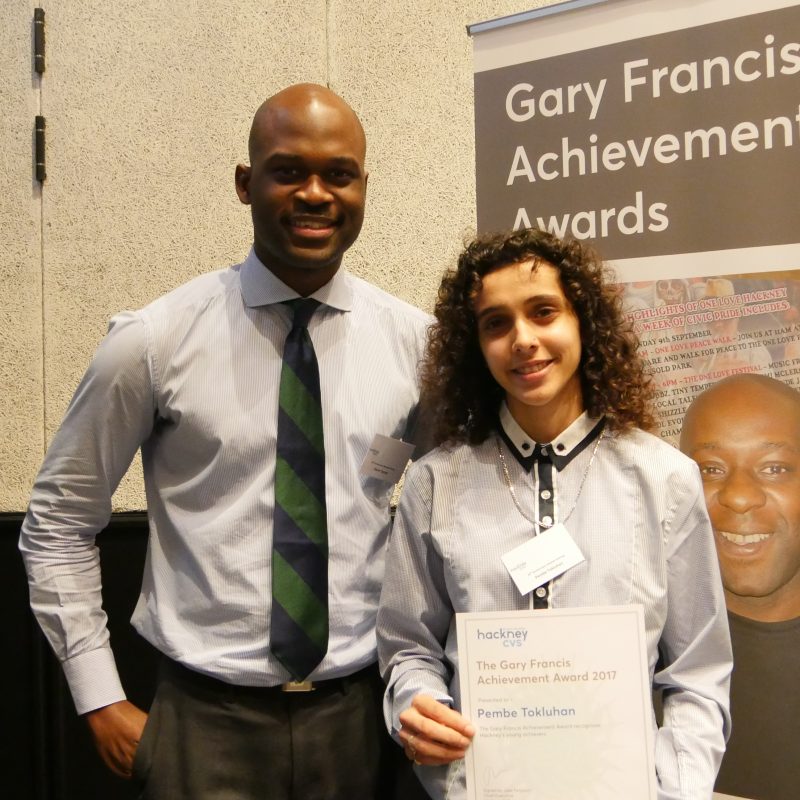 Pembe Tokluhan, one of our 2017 Gary Francis Youth Award winners, has gone on to win a prestigious Global Youth Award.

Global Youth celebrates empowerment, the environment, and education – and those making strides in these areas.

The list of Pembe’s achievements is impressive and still growing. She works as a music production manager in Hackney as well as freelancing as a sound engineer and DJ. She is a youth ambassador for the Crib charity in Hackney and works alongside the Peer Outreach Team in parliament where her role has included giving talks in City Hall and Parliament on young people who have experienced Adverse Childhood Experiences.

Passionate about making change, Pembe decided to use her experience and skills to run a youth music charity called Generation Uncovered and is now in the process of starting an all-female production company Petok Productions to support young offenders and women that have been through abuse and mental health problems.

We spoke to Pembe to learn more about her approach to career and plans.

“I started off taping leads to the floor and then slowly learned about sound engineering. I have always realised the importance of networking and giving every work you do 100%. Passion for music led me to study music production and business. To gain more experience in my field I always stayed in contact with people I had worked with previously.

There was a stage in my life where I did go down a very rocky path, but I’ve come out on the other side of that.

It’s important for me to give back to my community and help spread the knowledge that I have gained over the years.

I’d like to develop the charity I run. I have also started my own production company Petok Productions works with females within the music industry and helps them gain more experience and recognition. I am one of the youngest female live sound engineers in the UK and would love more females to gain experience in this field.”

Click here to watch a short video about Pembe’s Fixers project which aimed to tackle the barriers between the police and young people.

Click here to watch Pembe’s appearance on London Live, where she talked about the Global Youth Awards.

The Gary Francis Awards are given to young people who have overcome adversity to make significant and positive changes in their lives.

The next Gary Francis Awards will be given out in March 2019.

It’s all within the heart really so as long as you can make a difference to one person’s life, that gives you a lot of empowerment.

If you want to share ideas with Pembe regarding starting up a production company, you are welcome to contact her: