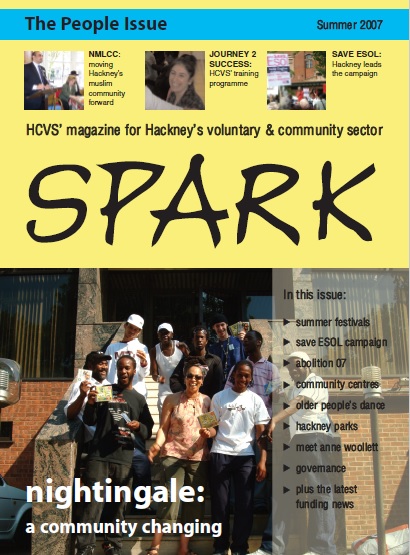 The History of Spark – an important community magazine in Hackney

To mark our 20th year of operations, we are creating an online repository of all the past editions of SPARK magazine so that people can access an historical record of voluntary and community sector activity in Hackney.

Spark was produced by Hackney CVS as a magazine to report on community activity and to highlight issues affecting the borough.

Spark was set up in the 1990s by Hackney CVS’s predecessor, Hackney Community Action. Under the direction of Hackney CVS it went on to become a treasured local resource and a force to be reckoned with in terms of influencing local government, which in the late 90s and early 2000s needed to hear more from local communities and activists working at a grassroots level in Hackney.

Intended as a colourful quarterly printed magazine, SPARK featured interviews with grassroots communities, community activists, politicians as well as articles about Council and government strategy alongside discussion pieces about local issues which mattered to the voluntary and community sector. Over 30 editions were produced from the 1990s until the final publication 5 years ago.

Never without controversy, Spark told it ‘as it is’ and didn’t shy away from talking about the real issues. In the June 2001 issue, SPARK interviewed the then Chair of the Local Strategic Partnership (LSP) who, when asked about involving faith groups in the work of the partnership said: ‘there are lots of people out there that say they are the representatives of their community and they actually aren’t’. These comments incensed many people who felt that the Chair herself was without any mandate from local people. She went on to resign her position as Chair of the Partnership. Following this the LSP went on to be an award winning partnership which involved many different people and communities, coproducing lots of its work in managing Neighbourhood Renewal funding and helping to turn around the fortunes of Hackney Council, which at the time was close to being put in special measures by government.

In the August 2005 issue, Spark’s lead reporter, Liz Hughes, ran an expose on the amount of funding that local authorities provide for services to young people. In 2004/5, Hackney Council was bottom of the league tables for investing in its youth according to data published by the Association of Youth Workers. Spark helped to shine a spotlight on this and now Hackney is one of the best providers of youth services in London, ensuring that our young people get the services they deserve.

As well as talking about important issues, Spark was also very practical and provided lots of information about funding opportunities, jobs and training available to local people and organisations. It also helped to launch or promote many organisations in the Borough such as Bootstraps, Disability Hackney and Clapton Park Play Project and Minik Kardes.

We wrote in a style that reflected people we were talking with – it was very much about voices from community sector.